Just came from one of the political “meet and greet” sessions preparing for the Iowa Caucuses; Gov. Bill Richardson, (D-NM) spoke to an audience in Sioux City of perhaps a hundred people, remarkable that there is enough interest in his candidacy to bring out people on a cold, dark, dreary night, the day after Christmas. He spoke easily and informally, taking questions and listening. At this point, the issues are well-known, and the audience is trying to determine if there are unpleasant nuances in the candidate’s stands. 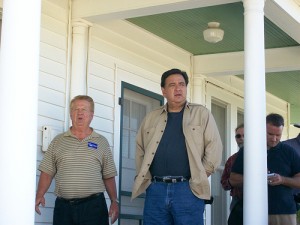 Earlier days in the campaign.

Speaking with a few other attendees afterwards, I wondered how many were like me: I see in Bill Richardson the plain, honest, straightforward person willing to look at a problem from all angles, and then choose the best course forward, aware that on almost any issue there will be some people dissatisfied, but still choosing on a basis of intellectual honesty, not on what lobbyists are paying for, not trying to manipulate the public into a “political party” agenda. I wonder if he can overcome the shallow hype, the tinsel crap that mainstream television journalism has become, and that to the detriment of the country, focuses on the “glamour” candidates.
Many of you know of Richardson’s career–Fifteen years in Congress, Secretary of Energy to President Bill Clinton, Ambassador to the U.N., special envoy to crisis spots, and lately Governor of New Mexico. A stable home life with a marriage of 33 years. He has spelled out his stands on the usual “hot topics”, and they are well reasoned, moderate stands.
Whoever becomes President, their programs will inevitably be mangled to some extent by the legislative process. Perhaps reasonable, moderate programs have a better chance of being enacted.
Of the other candidates, Senator Clinton is burdened by her own success. Whatever program she tries to enact, somebody will be saying, “but, you owe me.” Mr. Obama has charisma, charm, drama. My take is that he hasn’t been around the national scene to develop the network of distinguished advisors and supporters that a President should have. Chris Dodd and Joe Biden are both seasoned veterans of the Senate and men of integrity, but I think Gov. Richardson has nearly as good Congressional experience with added administrative and diplomatic experience. I don’t see Mr. Edwards or Mr. Kucinech as really being in the same league as the other candidates. So, I reject the glamour queen, the drama queen, the other wanabees in favor of Governor Richardson, a man of substance—honesty, integrity, honor, who would be a great President.

This entry was posted in Bill Richardson, Politics. Bookmark the permalink.