We have serious problems with our government–an unpopular war, an economy that enriches the most wealthy on the backs of the poorest, a coming crisis as oil dries up, yet there is very little public reaction. There are no student rallies, no marches on Washington. Why not?

In The Welch Girl: A Novel, by Peter Ho Davies, (p.223) there are a few scenes where a character, a Captain Rotheram, is interrogating Rudolph Hess–conversing, really; Hess has just been shown some films of large rallies with he and Adolph Hitler evoking strong reactions from the audiences. Hess asks the Captain what he thinks of the films. The Captain responds, “Vile lies. Rabble-rousing propaganda.”
“You Think so?” Hess mused. “That it incited the mob?”
“You don’t?” 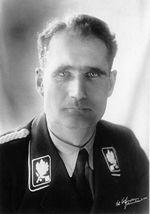 “I suppose so. But the mob was only a small number, really. A few thousand out of millions who saw the film. Not so efficient if its goal was to rouse”…
“A film like that,” Hess went on, “does something more important than stir the few, don’t you think? It makes the rest an audience. Passive, you see? You watch a film, you sit in a cinema, you see things, you feel things, but you do nothing.” He leaned closer. “That film made our actions a drama to be watched, talked about, as if it were only happening on a screen, on a set. Forget incitement. That’s the power of film, to draw a line between those who act and those who watch.”

As Americans, we are inundated by mass media, particularly television. When we turn on the news channels, we become part of the audience. We do not take actions that would influence our nation, our government. We are sitting on the wrong side of the line between those who act and those who watch. And what will the consequence be? The dissolution of our nation as we know it; a takeover by those who seek power for power’s sake. A nation moving from some degree of intelligence toward a stupidity foisted by selfish wealthy. What can happen? Go back and read Charles Dicken’s “A Tale of Two Cities.”

This entry was posted in Media. Bookmark the permalink.